Sign in / Register
HomeInstrumentationsSolo instrumentCaccia for Soprano and Max MSP, and Tape

Caccia for Soprano and Max MSP, and Tape

By: Benjamin Sajo
For: Solo instrument (Soprano)
This music is in your basket
View basket
Loading... 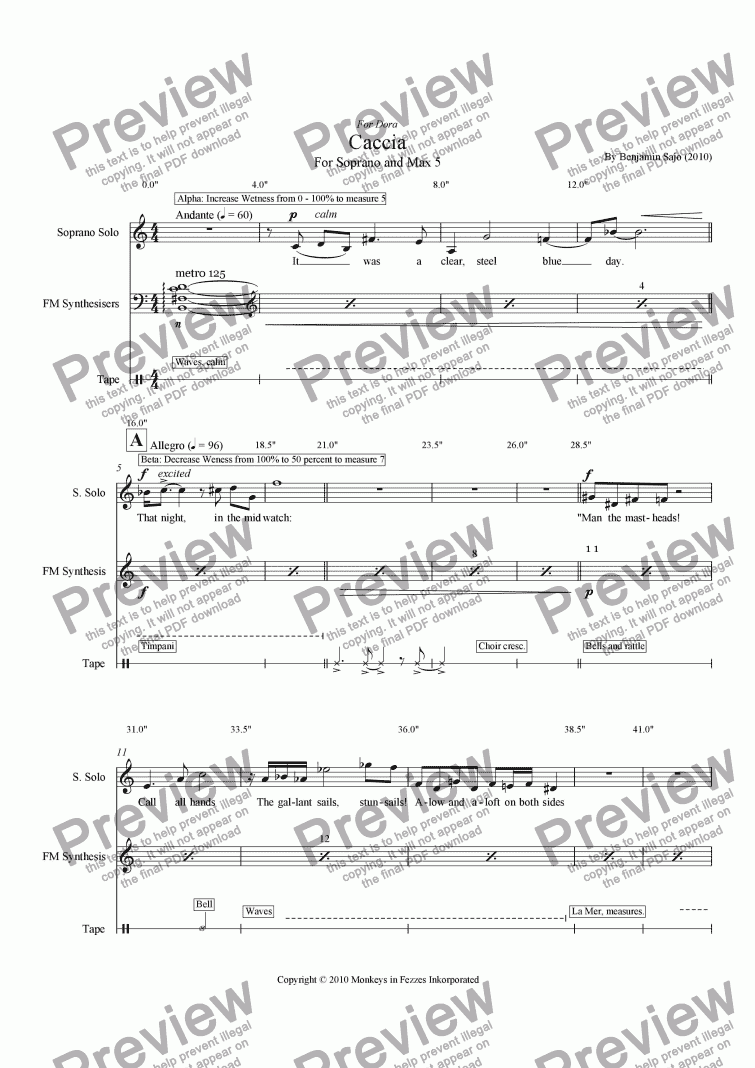 Caccia for Soprano and Max MSP, and Tape

Composer
Benjamin Sajo
Year of composition
2010
Lyricist
Herman Melville
Difficulty
Difficult (Grades 7+)
Duration
6 minutes
Genre
Modern classical music
License details
For anything not permitted by the above licence then you should contact the publisher first to obtain permission.

It was a clear, steel-blue day. That night, in the mid-watch: �Man the mast-heads! Call all hands! The gallant sails! Stunsails! Alow and aloft, on both sides! There she blows! There she blows! A hump like a snowhill! It is Moby Dick! He�s going to sound

The ship tore on, leaving such a furrow in the sea. The hand of Fate had snatched all their souls. They were one man, not 30, and were all directed to that fatal goal. �thy hour and thy harpoon are at hand!� A sight more savage than the embattled teeth of sharks, �Great God! But for one single instant show thyself! Never, never wilt thou capture him, old man �" in Jesus� name no more this, that�s worse than devil�s madness� �But in this matter of the whale, be the front of thy face to me as the palm of this hand �" a lipless, unfeatured blank. Ahab is for ever Ahab, man. Do you feel brave, men? Brave?�

�Forehead to forehead, I meet thee, this third time, Moby Dick!� �Drive, drive in your nails, oh ye waves!� �I grin at thee, thou grinning whale! Look ye, sun, moon, and stars.� �Oh lonely death on lonely life! Towards thee I roll, to the last I grapple with thee: from Hell�s heart I stab at thee; for hate�s sake I spit my last breath at thee!�

Program Notes: This composition is for soprano and Max MSP�. The title is a pun on the late-medieval vocal musical genre, the caccia - a fast, light canonic form �" and the last three chapters from Herman Melville�s Moby Dick, about the final struggle between the deranged whaling captain Ahab and his crew against the titular fantastic albino sperm whale. The melody is derived from a twelve tone row that has strong perfect sonorities. The Max patch is timed to alter delay times and chorus to the soprano voice, and time events of the five FM synthesizers that provide atmospheric ostinato figures with pitches based on the row. The tape utilizes subtle and not-so-subtle quotations from Claude Debussy�s La Mer, and Krystoff Penderecki�s Dies Irae from the Polish Requiem, as well as a UNESCO field recording from the tribes of the Solomon Islands. These sources provide a connection to the themes of the novel by representing the romantic notion of the sea, the Transcendentalist philosophies throughout the book, and the conflict between Mankind�s civilized and savage nature, as well as the more literal oceanic sounds and the songs of Humpback whales (although Moby Dick is a Sperm Whale, and their song is not the same, the Humpback�s song is synecdocal for all whales and the deep).

Reviews of Caccia for Soprano and Max MSP, and Tape