By: Friedrich von Flotow
For: Solo Solo Violin + piano
This music is in your basket
View basket
Loading... 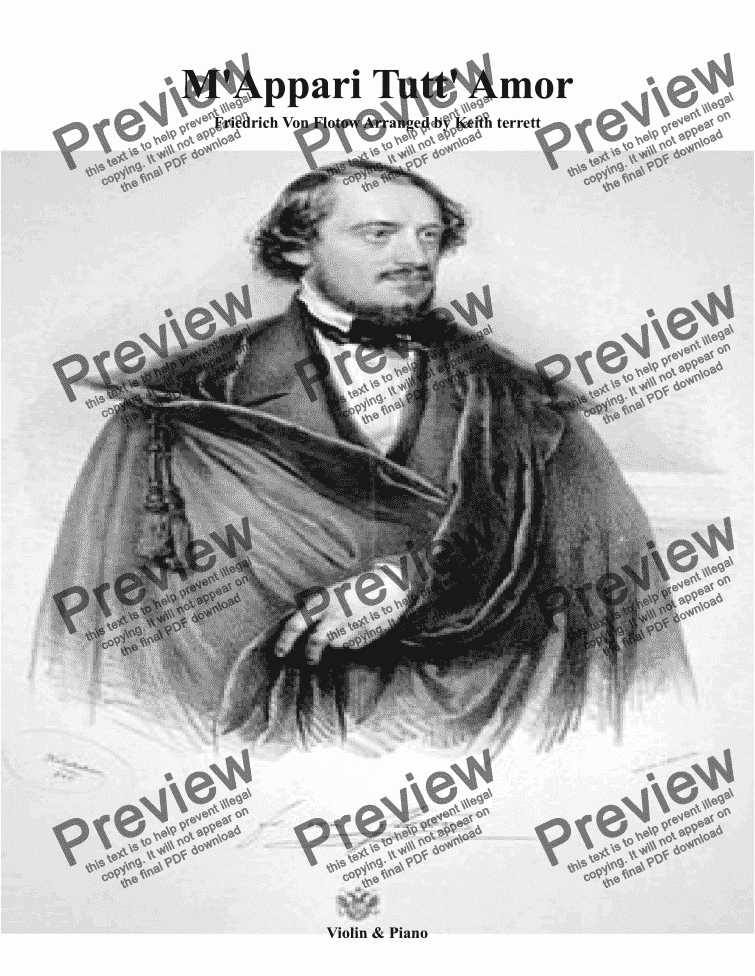 Composer
Friedrich von Flotow
Year of composition
1842
Arranger
Keith Terrett
Year of arrangement
2014
Publisher
Music for all Occasions
Difficulty
Easy (Grades 1-3)
Duration
2 minutes
Genre
Classical music
License details
For anything not permitted by the above licence then you should contact the publisher first to obtain permission.

In all, Flotow wrote about 30 operas. Many of these works were performed in different versions and under different titles, in German, French and sometimes other languages. Some survive, some are lost. All but Martha and Alessandro Stradella have fallen into relative obscurity, though there have been a number of attempts to revive other Flotow works in recent years.

His best known aria is probably "Ach! so fromm, ach! so traut." This was added to Martha eighteen years after the Vienna premiere. It was originally written for a Flotow opera of 1846. It has been much recorded in its Italian version, ‘M’appari tutt’amor’.

Certainly ‘M’appari’ was conceived as part of Martha in the original German, where it was known as ‘Ach! so fromm, ach! so traut’. Martha travelled from Vienna on to Weimar, Dresden, and Leipzig, then Budapest and Prague. And by 1849 it had made its way to London, where it was sometimes performed in five acts, with the libretto translated into English by Charles Jefferys. It was produced in New York City in 1852, and in Melbourne in 1856. And it was first performed in France by the Théâtre-Italien at the Salle Ventadour in Paris on 11 February 1858. This Italian version of Flotow’s opera introduced the song as ‘M’appari tutt’amor’.