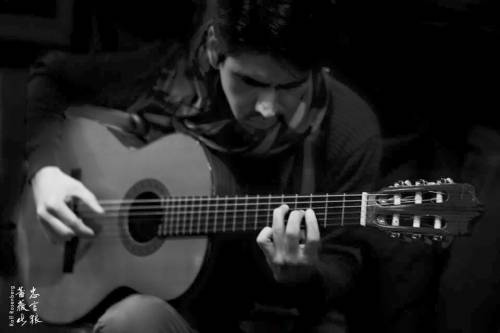 Amery is well known from his previous bands, Espinaks and Zuraz. Where he played bass and performed/toured many shows and received critical acclaim through radio airplay throughout Lima, Peru, and also made a TV appearance. He has created a very innovative platform and has garnered a respectable fan base and a recognizable name in many music scenes as a solo artist. With an insatiable drive and undeniable talent with proper experience on stage and off, the rising artist released his album Menscor, which captivated many ears and received many positive reviews from many well-known industry blogs including SleepingBagStudios and more. Shortly after this, He released the sophomore album, Mr. Black Pants, which topped its predecessor. Many tracks from the album were played in many online radio networks across the globe after its initial released, and the album was featured on Cross Radar, Indierockcafe and many more. December 15th of the year 2016 comes to a close, the rising Artist released his most remarkable album, Latinoameryca. Which became highly anticipated from both his fan base and the industry alike. He released in May 2017 his most ambitious and masterpiece My Statement, Which impressed the music industry and lead him to got to work with the label Ostereo, England. In 2017 same year, the unstoppable Amery, the genius music producer, cames from his large creativity source new songs which are included in the album, Show Must Go On! In 2018 Amery continued non stop hitting the world with new albums Falling Down, Sickness Called "Fell in Love" (Deluxe) In 2018 same year Amery got the attention of Spotify playlist editors and created: This is Amery Rey Tuesta, with 50 amazing songs ever. On 2019 the prodigy music producer came with the new trend album Freedom. As the artist continues his winning streak with new music and shows in the shortcoming, expect nothing less than amazing efforts from Amery Rey Tuesta throughout 2019 and beyond.