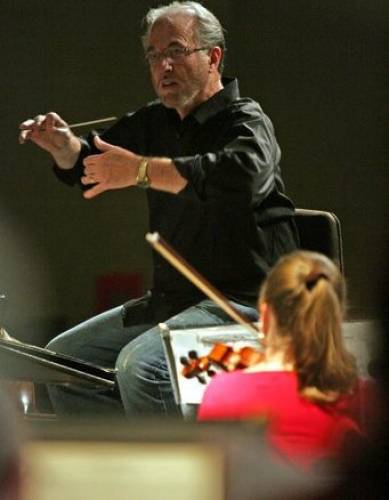 Mr. Stanbery lead a performance of his "Music For Mass" (found here on Score Exchange) on June 17, 2018 to a full house. The acclaimed performance was received with a standing ovation, lead in part by his granddaughter, Claire.

Mr. Stanbery was also the founding conductor of the Blue Ash-Montgomery Symphony and the Clermont Philharmonic orchestras.

In November 2005, Mr. Stanbery won the prestigious Post-Corbett Award (Performing Artist Division). Given every other year, the Post-Corbett Award was the region’s highest artistic honor, recognizing outstanding achievement in many fields of the visual and performing arts. Mr. Stanbery was the first conductor so honored not to be associated with the Cincinnati Symphony Orchestra.

Mr. Stanbery worked for 19 years as music director of All Saints Parish and School in Cincinnati, and he has been an educator for more than 30 years, including work in several Toledo area schools. In 2002, Mr. Stanbery was appointed music minister at Hamilton’s “Historic Presbyterian Church”, then held the same position at St. Peter in Chains Church in Hamilton from 2008 to 2013. He presently is minister of music at Zion Lutheran Church in Hamilton.

The BPO Chorus was founded by Paul in 1997, and performed in Carnegie Hall with John Rutter on May 30, 2005 in a command performance of the Brahms “Ein Deutches Requiem”.

Mr. Stanbery is also the founder and artistic director of Hamilton’s “Ohio Mozart Festival”. Now in its 17th year, the Mozart festival remains the only event of its kind in the Midwest, having presented over 200 performances of Mozart’s works.

As a composer, Mr. Stanbery’s Symphony No. 2, “Foundations”, was nominated for the Pulitzer Prize in music for 2012. The composer led the premiere with the then-Hamilton-Fairfield Symphony Orchestra in October 2012 to a wildly enthusiastic audience. Repeat performances have been planned by several orchestras.

Mr. Stanbery also remains dedicated to music by other living composers. He initiated the Butler Philharmonic’s American Masters Concerts, which bring distinguished, living composers to the community for a week, culminating in a concert featuring their works. This series continues to draw national attention from Symphony magazine, the official publication of the League of American Orchestras. Chester Lane called the BPO “one of America’s high-octane smaller budget orchestras”.

To date, the BPO has presented numerous world premieres and has featured collaborations with several Pulitzer Prize-winning composers. The roster reads like a who’s who in American composition and include H. Owen Reed, Robert Ward, Thomas Benjamin, James Niblock, Charles Lloyd, Ronnie Kole, Wallace Depue, Philip Koplow, Ellen Taafe Zwilich, and Michael Daugherty. Mr. Stanbery also conducted the North American Premiere of works by noted Dutch composer Louis Andriessen in the summer of 2003, including “M is for Man, Music and Mozart”. These concerts took place at the University of Cincinnati with the composer present.

Mr. Stanbery believes strongly in the importance of reaching young people with classical music and has become well known throughout Ohio for his work in that regard. His work with the BPO Youth Orchestra has brought high praise, and he helped form an enormously successful new series for children as a cooperative venture between the Butler Philharmonic and the Lane Public Library System entitled Mini-Maestros.

Mr. Stanbery composed original music specifically for several such presentations. His work with the Lima Symphony also included educational concerts in schools, as well as the presentation of the “KidStuff” programs in tandem with the Lima Public Libraries. Under his watch, the BPO has established four separate scholarship opportunities for young musicians and singers.

Paul lives in Cincinnati with his wife, the artist Patricia Jackson Stanbery. All six of their kids (Aaron, Angela, Adam, Katie, Pete, and Benjamin) have grown up and moved out!