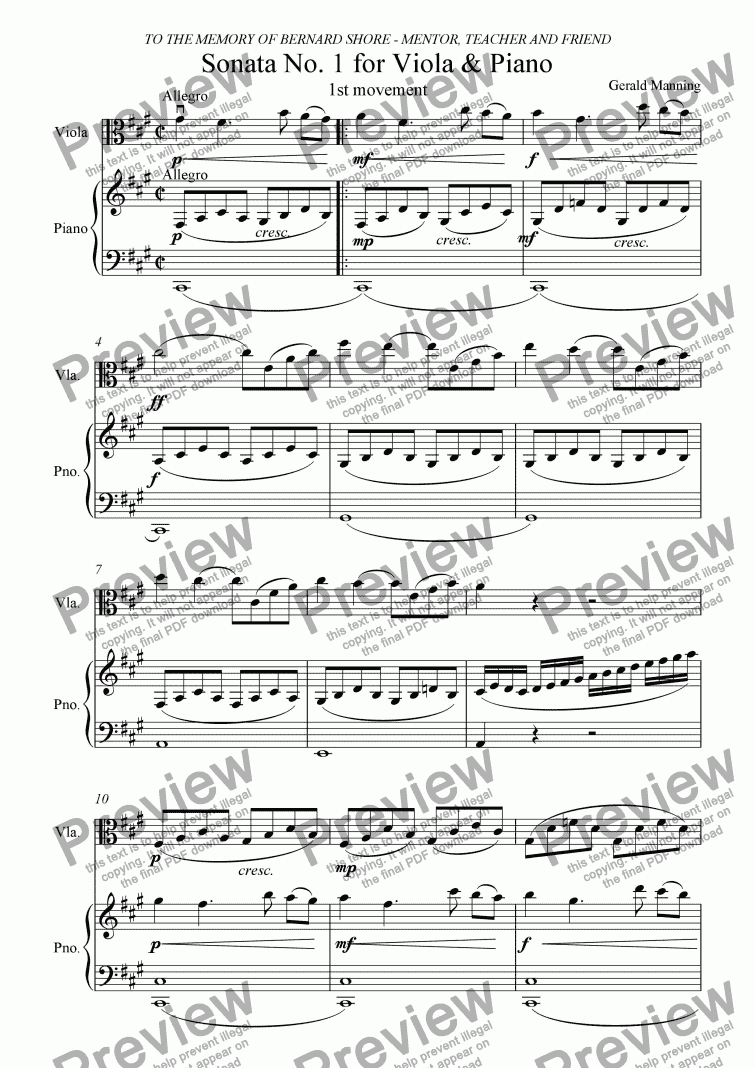 I began work on my first viola sonata on the 11th of October 2005 and completed the work on the 5th of December of the same year. There are four movements. The first movement Allegro is in the key of F sharp minor and is in sonata form. A full statement of the first subject is given by the viola, which is then repeated by the piano, which blends into a bridge passage and then works a number of short ideas, and because of sonata form�s origins in binary form the exposition is then repeated. The development section, which follows the exposition, is then worked and metamorphosed through several key changes until the recapitulation and coda close the movement. In the second movement which is very song like in character I have used the simplest structural form that of the strophic to delineate this very simple melody and ornament it through its manipulation of rhythmic ideas. The Adagio metronome marking is ambiguous in that this movement should be played in a crotchet beat and not in quavers so the music is not played too slowly. Likewise I have marked the third movement Scherzo Presto which is rather fast but if my tempo is not achieved the music will lose something of its spirit and wit. It is very important as well that all repeats should be adhered to, sometimes Sibelius software doesn�t play my repeats even though my originals do, I must be doing something wrong when I input the repeat bars in my score! Although the tempo designated in the last movement Rondo Finale is alla breve, the music can stand, after the frantic scherzo, certain leisureliness in its rondo form.

I have been very fortunate to study with some of the finest teachers in the world and I have dedicated this sonata to the memory of Bernard Shore, my teacher at the Royal College of Music, an inspirational and brilliant mentor who has had a very great influence on my life. His two books The Orchestra Speaks and Sixteen Symphonies are the most treasured volumes in my library. It was through him that I met the legendary Lionel Tertis, the prince of great viola players, who was his teacher, and like Tertis, Bernard Shore always championed and loved the viola - so do I!