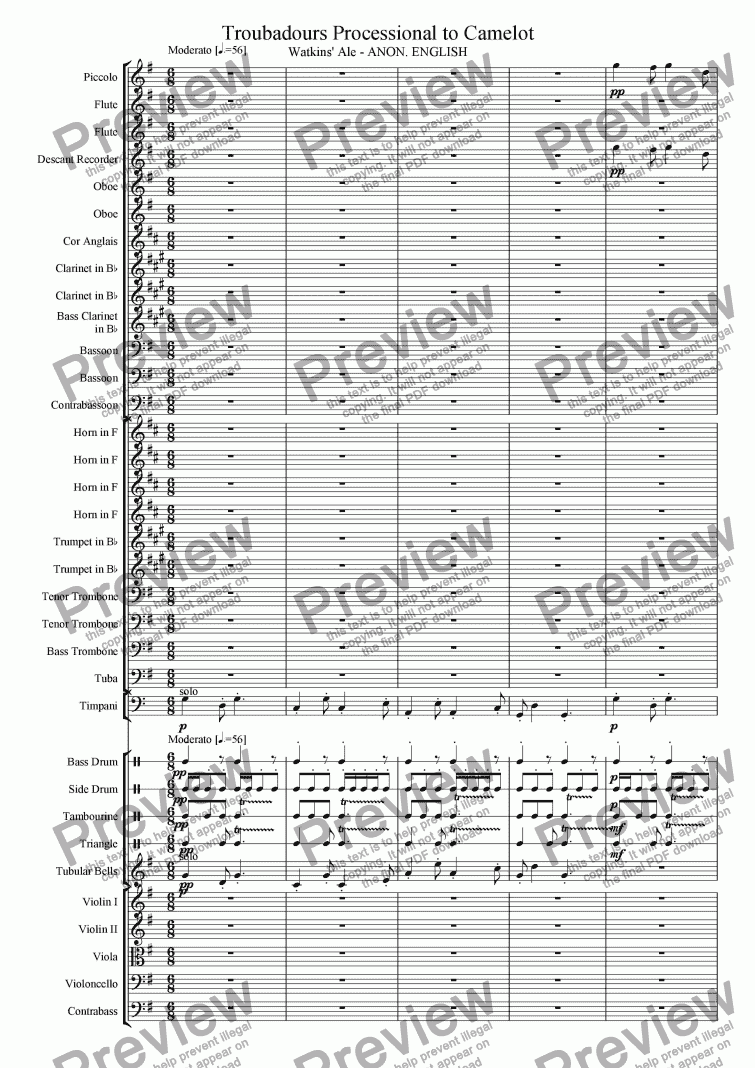 Composer
Gerald Manning
Year of composition
2006
Publisher
MANNING SCHOOL
Difficulty
Difficult (Grades 7+)
Duration
22 minutes
Genre
Classical music
License details
For anything not permitted by the above licence then you should contact the publisher first to obtain permission.

Henry Purcell obviously had an interest in Arthurian Literature of the Middle Ages for he composed a Stage Work in 1691 called King Arthur, or The British Worthy. The legendary warrior champion may never have existed but, the exploits attributed to him in the legends, which have made him one of the most famous characters in British History, have fascinated writers, poets and musicians throughout the ages.

The time is the sixth century; Arthur the good king of Britain whose compassion teaches us forgiveness and love presided over a magnificent court of truly royal splendour at Camelot with his followers the Knights of the Round Table at that most costly feast known as Pentecost. Camelot is perched on a promontory of rocky coast that juts out into the sea. Against a backdrop of a clear azure sky it reflects the golden rays of the sun into the valley below its battlements.

In Arthurian Romances I have taken four legends and arranged them into four movements as tableau; 1. Camelot � In the Court of King Arthur and Queen Gwynevere; 2.Scherzo & Trio � Sir Launcelot Du Lake; 3. Romanza � Cliges and Fenice; Epilogue � Le Conte du Graal � Perceval. Each one of these four tableau are prefaced by a processional Elizabethan anonymous melody taken and adapted from the �Fitzwilliam Virginal Book� and the �Weald Lute Book� called Watkins� Ale.

TROUBADOURS PROCESSIONAL: Watkins� Ale: ANON. ENGLISH The work opens as a troupe of troubadours� singing, dancing, blowing pipes, banging drums; tambourines and triangles make a slow procession to King Arthur�s Pentecostal tournament at Camelot. Behind them and mounted on their magnificent steeds� are several of the Knights� of the Round Table; Sir Gawain, Sir Gareth, Sir Modred, and Sir Lamerok who are all making their way to the jousts. As they enter the great courtyard of Camelot grooms rush to take charge of their horses.

TABLEAU I - CAMELOT - IN THE COURT OF KING ARTHUR & QUEEN GWYNEVERE They enter the great hall of Camelot where minstrels are playing a stately dance; the troubadours who augment the entertainment much to King Arthur�s delight, persist in continuing to bang and blow much to the annoyance of the minstrels who are placed high in the minstrels� gallery. The dance continues until Horns, Trumpets and Drums in a quicker tempo processional theme announce the arrival of Sir Launcelot Du Lake: Son of King Ban of Benwick. King Arthur�s favourite. Champion and lover of Queen Gwynevere.

Sir Launcelot now enters the scene in great animation and proceeds into the Great Hall of Camelot. The musicians in the minstrel�s gallery start playing his dance (trio). Sir Launcelot bows before Arthur and Gwynevere, takes the Queen�s hand and leads her into the dance. The movement closes with a repetition of Launcelot�s entry music. The processional which follows is in a subdued vein and scored high in woodwind; leads into the Romanza - Cliges and Fenice.

Violas and Cellos sing this love theme in exaltation of the pure love of Fenice for Cliges. However there is bitter irony in the melancholic character of the music as Fenice is married to Alis and Cliges is her sweetheart, and this is really a lover�s lament. I have tried to convey and explore the psychological penetration into the hearts of the two lovers. This movement constitutes the core of the whole work. The processional now a stately Maestoso and orchestrated for strings leads us into the mysteries of Perceval and the Holy Grail (Sangreal): the legend of the silver chalice in which Joseph of Arimathea collected drops of blood from the wounds of Jesus Christ when He was crucified.

The opening of this movement is shrouded in darkness; over a pedal low E flat given out by Cellos and Basses a single bell tolls the processional theme in an Adagio tempo while upper strings aided by two Flutes and a Descant Recorder climb through torturous chromaticism�s into the Hymns being sung by the monks. The movement which ends the work closes dramatically with the return of the ominous opening bars that are stated without any preparation, but in the very last two bars the music moves and slides like a ghostly figure into a conciliatory G major.