By: Joseph Parry
For: Solo instrument (Piano)
This music is in your basket
View basket
Loading... 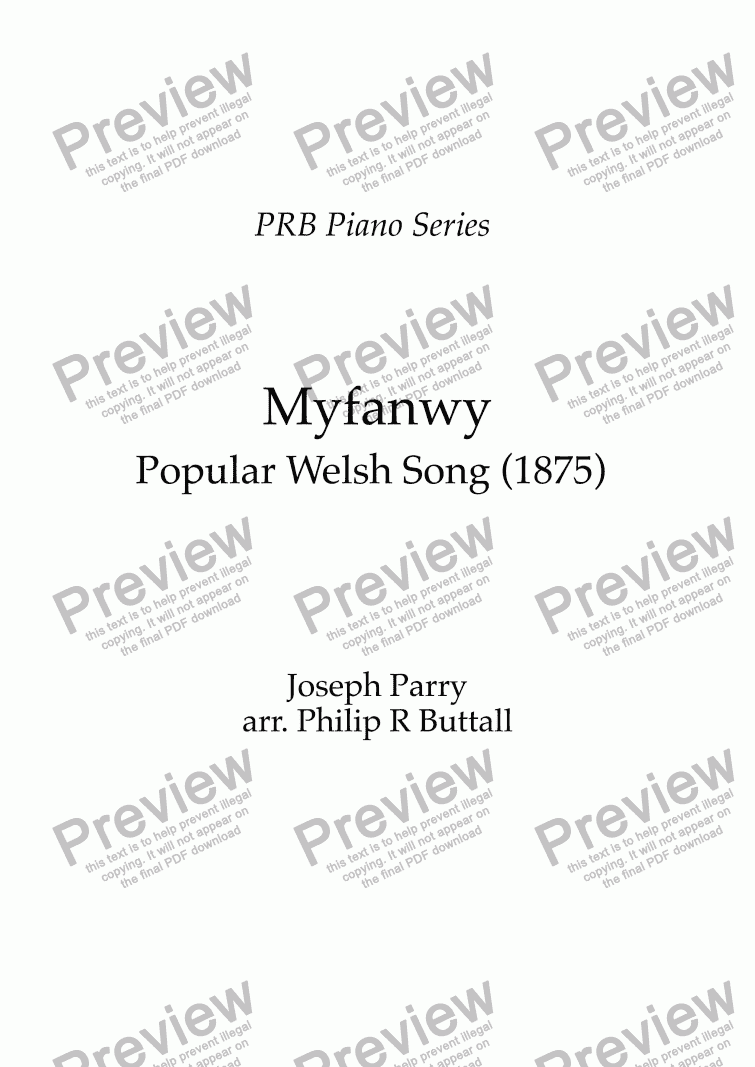 Myfanwy is a popular Welsh song, composed by Joseph Parry and first published in 1875. Sources differ as to whether Dr Parry composed the music for an existing poem by Richard Davies, Mynyddog Mwynfawr - the common belief, or whether Davies wrote the words to Parry's melody following its use with an English lyric by Thomas Walter Price. Richard Davies' lyric may have been influenced by the 14th Century love story of Myfanwy Fychan of Castell Dinas Brân, Llangollen, and the poet Hywel ab Einion.

That story was also the subject of the popular poem, Myfanwy Fychan, by John Ceiriog Hughes. Some sources say it was written with Parry's childhood sweetheart, Myfanwy Llywellyn, in mind. In 1947, Merthyr-Tydfil-born author, Jack Jones, wrote a book entitled 'Off to Philadelphia in the morning' where he relates the story within some aspects of the life of Dr Joseph Parry, weaving facts into his fictional narrative.

It's a plaintive melody, and beloved of Welsh Male Voice Choirs, of which the particular qualities of Welsh First Tenors come into their own. It was a regular, and popular piece with the Plymouth Police Choir, which I helped set up, and conducted for the first ten years or so.

A student of mine, with Welsh connections, wanted to get hold of a basic piano version of the melody, and had gone online to find one. Just out of curiosity, I had a look, too, and was quite appalled at the standard of some of these transcription/arrangements, many of which an able school pupil could have done better - and then you have to pay for it! So it seemed a good idea to provide something similar myself - and which I have dedicated to my student.

I have set it in G, and deliberately not made it as hard as some of my other arrangements, in the hope that those who like Wales and Welsh music can play it without too much difficulty.

A vast improvement on the one I recently purchased, I hope many others find this version. Eager to play it. Interesting details about the song too. Diolch yr fawr am yr amser a'r meddwl.

Previous Next
In order to submit this score to ScoreExchange.com Philip R Buttall has declared that they own the copyright to this work in its entirety or that they have been granted permission from the copyright holder to use their work. If you believe that this score should be not available here because it infringes your or someone elses copyright, please report this score using the copyright abuse form.