By: John Philip Sousa
For: String quartet
This music is in your basket
View basket
Loading... 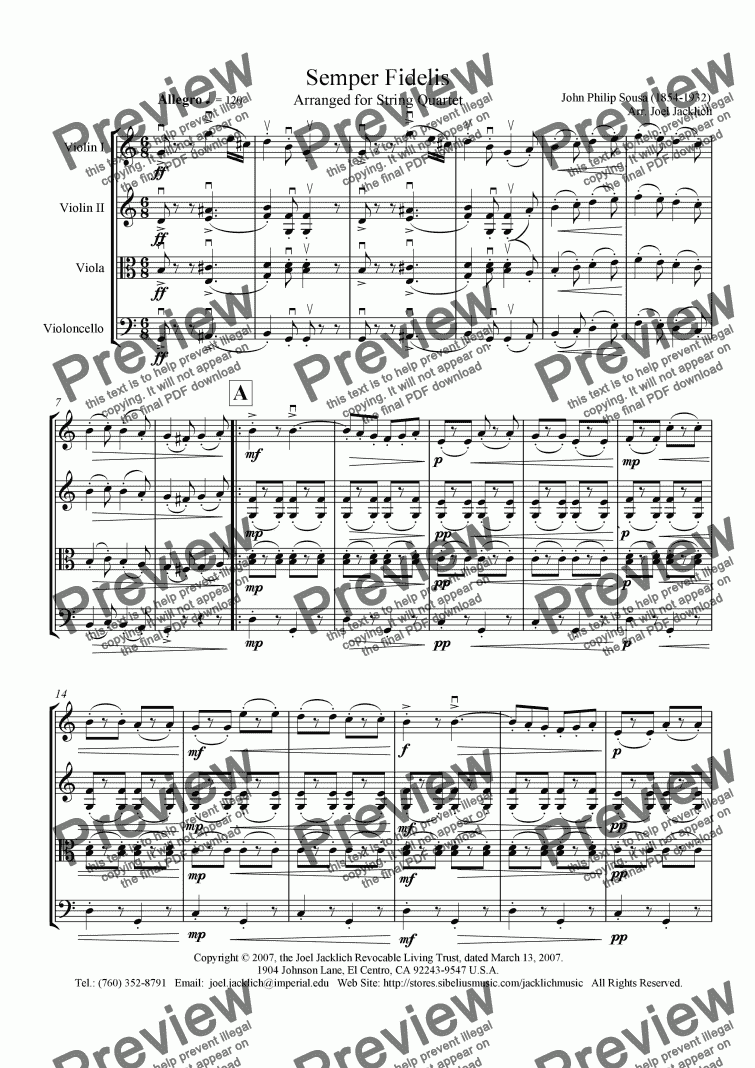 America’s March King, John Philip Sousa, was the director of the U.S. Marine Band from 1880-1892. As such, he brought the band to new heights of professionalism, turning it into one of the world’s premiere bands. Semper Fidelis (Always Faithful) is the motto of the U.S. Marine Corps, and is meant as a tribute those gallant fighting men for whom his band served as the musical voice.

The U.S. Marine Corps is a versatile armed service–land, sea, and air–and is attached to the U.S. Navy. This arrangement was written to be performed in October, 2007 at the U.S. Navy Birthday Ball at the Naval Air Facility, El Centro, California, where there are sure to be many Marines in attendance.

When performed by the U.S. Marine Band, there is an eight measure drum cadence prior to the trio. In this arrangement, the drums are simulated using a guitar technique–golpe–by drumming the fingers of the left hand on the body of the instrument (or, alternately, by dropping the bow stick, col legno fashion, onto a C on the strings).

The bugle-call melody in the first part of the trio was originally intended as a slow love song from one of Sousa’s ventures into operetta. Nowadays, one can hardly think of that famous tune in any context other than this march.

If you enjoy this arrangement, visit my web store at: http://stores.sibeliusmusic.com/jacklichmusic where you will find more than 200 arrangements and compositions (mainly for string quartet).