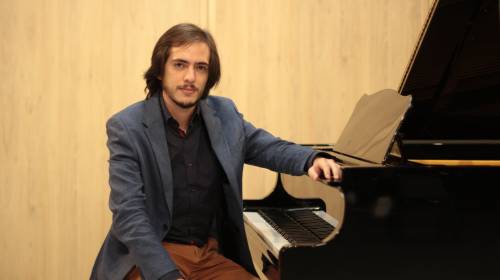 He earned his degree in professional music composition at EAFIT University, Medellín, Colombia in 2018. During his career, he received composition lessons with professors Marco Alunno, Andrés Posada and Víctor Agudelo. In 2017 he had the opportunity to study with British composers Richard Leigh-Harris and Edwin Roxburgh, during an academic exchange program at the Royal Birmingham Conservatoire, Birmingham City University, United Kingdom, where he also studied a specialized course in editorial techniques.

In 2016, he won the Premio Nacional de Música en Composición para Coro y Formato de Cámara (“National Music Prize in Composition for Choir and Chamber Ensemble”), granted by the Programa Nacional de Estímulos (“National Program of Incentives”) of the Ministry of Culture of the Republic of Colombia, with his piece Shir Hashirim: Prelude and Chant on the First Section of “The Song of Songs”, Op. 5, for SATB choir, chamber ensemble and percussion. In 2017, he was finalist in the Philip Bates Prize for Composers and Song Writers, UK, with his piece The Light of God, Op. 6, for soprano and string quartet. In 2018, he won the Concurso Jóvenes Talentos (“Young Talents Competition”) granted by the EAFIT Symphony Orchestra, with the first movement of his Symphony N° 1: In Nativitate Domini, for orchestra. In addition to these pieces, his catalogue includes several compositions for solo piano, piano duet, and different instrumental chamber ensembles, as well of arrangements of classical music, South American folk music and film music (not all his arrangements are available for purchase).

His music can be found on YouTube and SoundCloud.