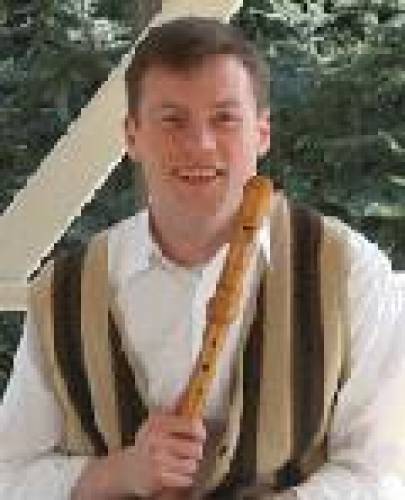 Originally from Buffalo, NY, I am an avid fan of the recorder and formerly served as president of my local chapter of the American Recorder Society (East Bay Chapter). My music is fun because it usually engages all players, and when you write for amateur players, this is an important feature! I recently began adding music for multiple clarinets from way back in high school. If you thought the recorder music seemed untrained, wait till you hear this really old stuff. UPDATE 5/17/02: I have won First Prize in the biannual composition contest sponsored by the Chicago Chapter of the American Recorder Society. The winning piece, Recorder Quartet No 2 "Wanderlust", has just been added to my listings. This is the second time I've won, having also won in 1997 (with Prelude & Fugue No. 1 for Recorder Quintet). UPDATE 10/23/03: I have won Second Prize this year in the Chicago composition contest with "Canterbury Trio", which I have just listed! UPDATE 3/1/06: I have had three commissions: Vivaldi's Ark, Trio sonata for Barbara Steinberg, and a 5-part arrangement of the Follia Variations for Recorder Orchestra. UPDATE 5/15/08: More winnings! First prize in the 2007 Chicago Competition with "French Sweets" AND 3rd prize in an international contest sponsored by the American Recorder Society and the Amsterdam Loeki Stardust Quartet.